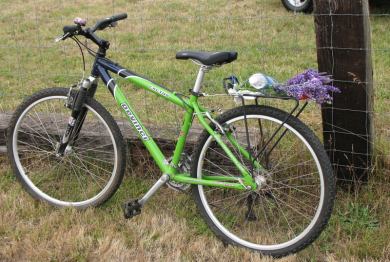 The article below was written by Patricia Curtis of Florida Partners in Crisis.
She wrote it for the Partners newsletter. I would love to give her credit for
the article.

For nearly half her life, Peggy Symons lived in the shadow of  schizophrenia, with thoughts of suicide her daily companion. Today,  Symons is one of Florida's most well known advocates for people with  mental illnesses.

She has gained recognition for her eloquence in focusing public  attention on the needs of people with mental illnesses.  In her writing  and public appearances, she works to battle the stigma surrounding  mental illnesses and to encourage others with brain disorders on their  path to recovery.

Symons, 60, unflinchingly describes her battle to overcome the symptoms  of her illness and to carve out a new life for herself.  Over the years,  she has had numerous hospitalizations, spending a total of  two-and-a-half years in hospitals.

"That I made it to 57 is a miracle," she said, "Because I walked through  the valley of the shadow of death for 25 years until I got on the right  medications."

To help aid scientific understanding of the illness, Symons and six of  her brothers and sisters participated in the National Institutes of  Health's Genetic Study of Schizophrenia in 1998.

Included as part of the research were MRI studies of their brain  functions, studies which Symons says looked for differences between her  brain and that of her siblings—none of whom have the illness.  She  believes that trauma at her birth, which resulted in a loss of oxygen,  set the stage for her illness.

Mom knew early on her child had a problem

But, she had an anchor throughout those dark and difficult years:  the  La Amistad Behavioral Health Services of Maitland.  Now a hospital, La  Amistad was a halfway house for people with serious mental illnesses.   It was there she said that she first began to have hope for her future.

After nine months in the residential program, she returned home to live  with her mother. But, her connection to her psychiatrist at La Amistad,  Dr. Walter J. "Joe" Muller, continued to serve as a lifeline for her.

Muller conducted weekly group meetings for people with schizophrenia,  meetings which provided support and understanding as well as ongoing  monitoring.

"He saw us in group for free," Symons said. "I wouldn't have survived this illness without that support."

"It wouldn't have happened were it not for the help and generosity of  people at the university willing to step in on my behalf when needed,"  she said.

Unfortunately, her college degree didn't prove to be her ticket to the  job and good life she had anticipated.  "No one would hire me and I  couldn't live independently," she said. "I had to find a place for  myself in life."

Things began to change in 1998. After failing on 30 different  medications and being hospitalized 16 times, Symons was prescribed one  of the new anti-psychotic medications.  "My brain lit up like a  Christmas tree," she said, shedding light on the shadows.

It was about that time that she began to become involved with advocacy  work, thanks in large part to NAMI (National Alliance on Mental Illness)  of Greater Orlando's staff and members who reached out to her and  included her in panel presentations and other activities— even though  there were times she couldn't say anything.

"Early on in my advocacy, I made mistakes and NAMI had great patience  and forbearance. They saw what I had to contribute and realized I needed  a lot of direction."

Partners in Crisis "has also helped be a bridge for me and empowered  me," she said.  "They have reached out to me and other consumers,  involving us as equal partners."

Encouraged by the research being done into brain disorders, she also  began writing in an effort to educate others about mental illnesses and  to help dispel the misconceptions that still prevail.

In addition to articles and guest columns, Symons has had several  letters to the editor published by USA Today as well as Newsweek  Magazine.  She has appeared before legislative committees and state  advisory boards to advocate for needed improvements in mental health  care and spoken to a variety groups about mental illness.

She also is a NAMI Crisis Intervention Team (CIT) trainer and a NAMI  Parents and Teachers as Allies presenter.  Her contributions have earned  her awards from Seminole County Community Mental Center, the Mental  Health Association of Central Florida and NAMI of Greater Orlando.

Hope and recovery are key message

Throughout her writing and public appearances, Symons emphasizes a  consistent theme of hope and recovery.  Having hope is critical, she  said, because "the illness doesn't go away. Every single day, you are  struggling with significant difficulties."

Access to treatment is another part of Symons' message. "Treatment works  if you can get it and access to modern psychiatric medications is  vital."

Symons recently achieved a major milestone when she leased an  apartment.  It will be the first time she's lived on her own and she  approached the move with optimism, grateful for the help and support  from her "multi-talented family" and friends.

Among those who Symons says have been among her support network over  the years are advocates Mike and Marcia Mathes, longstanding leaders of  NAMI of Central Florida and NAMI Florida.

"We've been doing CIT training in Central Florida since 2001, and I  think Peggy has missed only two classes out of over 50 during those  years," said Michael Mathes.

Symons has knack of connecting with her audience

"She is our cleanup hitter," he said.  "We always save her for the last.  She has the knack of being able to pull everything together from the  other presenters and boil it down to the core of what CIT is all about."

He said Symons is able to sense those law enforcement officers in the  classes who have doubts and address their concerns in her remarks.   "There is no one who could possibly be more effective," he said. "She  mesmerizes them with her story and the way she talks about it."

"There's this combination of her physical presence, her way with words  and her gentle delivery," said Marcia Mathes. "I can see them (CIT  trainees) thinking, 'This isn't a crazy person. This is someone like my  mother or my aunt or my sister.' "

Marcia Mathes noted that Symons also been effective in helping make  educators and others aware that the symptoms of mental illness can  appear in early childhood, sharing with them "the  key moments in her  life as a person who was destined to have a mental illness."

Gail Cordial, now executive director of Florida Partners in Crisis, knew  of Symons' advocacy in the years before she joined Partners.

“I had seen Peggy testify in committee hearings and was always impressed  with her eloquence and the way she could deliver such a powerful  message in a three-minute time slot,” Cordial said.

“Now that I’m at Partners in Crisis and have the opportunity to know her  personally, I’m still in awe," she said. "Peggy is one of the  brightest, most caring individuals I’ve ever met.”