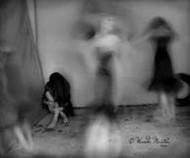 Hallucinations and delusions are larger than life. They are filled
with characters, harlequins and images of hell.

What most people don't know is that
the worst of psychotic symptoms tend to rise and retreat.

But even hallucinations and delusions with all their horror and fury do not take a greater toll on our lives
than what psychiatrists call the negative symptoms of schizophrenia.

This is where this illness lays
its most difficult burdens.

Negative symptoms are caused by a paralyzingbreakdown of the chemistry of the brain.

It is like having a transmission that is broken inside and gears won't work.

Days and dates lose distinction and the colors life fade and blur into chronic
shades of grey. Nothing matters and nothing moves under the weight of this
silent void.

For years no one understood why I
didn't move much, date, go out with friends or pursue a career path. I simply
couldn't move.

The major showdown of the day was getting into the shower.

Sometimes the shower won and sometimes

Washing my hair would go by
the wayside for weeks.

I often slept with my shoes on so

I would not have to put them back on in the morning.

Before a new antipsychotic
medicine became available to me in 1998, 25 years of my life folded and collapsed
under the weight of this ungodly wasteland.

This is the endless place where
schizophrenia, this great the thief of the night, silences those whose lives it
steals.

Without an expert psychiatric care and the new generation antipsychotic
drugs life stops here for many people.